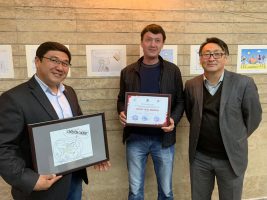 On May 3, on World Press Freedom Day, the exhibition of the caricatures of the participants of the republican competition “Freedom of Speech through the Eyes of a Cartoonist” was opened at the Bishkek Humanitarian University named by Kusein Karasaev.

This competition was organized by OO “Journalists” with the support of ‘the Soros-Kyrgyzstan” and in partnership with BGU.

The main objectives of the competition were: attracting public attention to problems in the field of freedom of speech and strengthening solidarity among journalists of the Kyrgyz republic.

The competition received 68 works from 23 authors, including not only professional artists, but also amateurs.

The winners were awarded at the same event. The works were evaluated by a jury, consisting of 6 chairman of the media sphere and 1 professional artist- Taalay Usybaliev, Chairman of the Union of Artist of the Kyrgyz Republic.

Valuable prizes and diplomas were awarded:

Incentive prizes were given to: Salamat Shakirov and Jyldyz Amandukova.

Resource Center of “the Soros Foundation-Kyrgyzstan” resumes its work