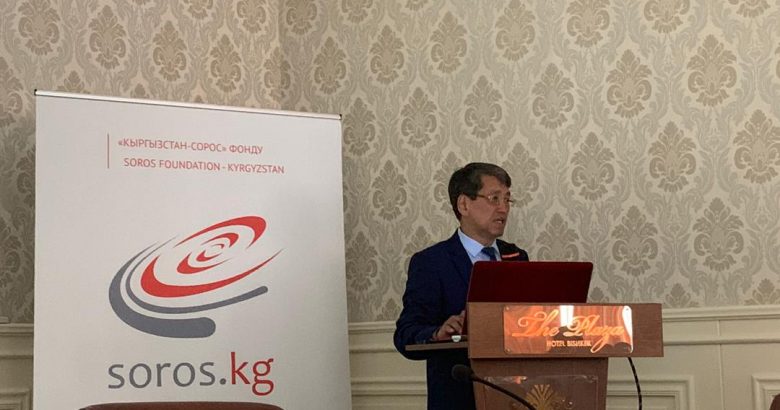 A roundtable, “Digitalization is a priority direction in the reform and development of the educational environment of the Kyrgyz Republic”, was held in Bishkek on May 23. The event was attended by the Ministry of Education and Science of the Kyrgyz Republic, the Kyrgyz Academy of Education, the Kyrgyz Association of Software and Services Developers, the Foundation “Center for Media Support” , as well as representatives from universities, schools, partner organizations and international organizations.

The main idea of the roundtable was the discussion of the draft Unified Concept for a development of an educational system with elements of media-informative literacy in the framework of the goals and objectives of the state Digital Transformation Concept “Digital Kyrgyzstan 2019-2023”.

During 3 month, working group of experts from the Ministry of Education and Science of the Kyrgyz Republic, the Kyrgyz Academy of Education, the Kyrgyz Association of Software and Services Developers, higher educational institutions and the media community worked to synchronized four proposed options for the development of the educational system in terms of digitalization into a single document with a mandatory component of media information literacy. The working expert group based its work on the UNESCO standards in promoting media literacy, Digital Transformation Concept “Digital Kyrgyzstan 2019-2023”, National Development Strategy of the Kyrgyz Republic for 2018-2040 and the Concept of e-learning and digital education management in the Kyrgyz Republic.

As one of the examples, a pilot version of the textbook “Man and Society” with elements of media-informative literacy was presented at the event. This is a new type of electronic textbook with online tasks, tests, multimedia texts. Following the example of other countries, where MIL standards are being successfully implemented. Kyrgyzstan also proposes to integrate them into various subjects and disciplines in order to media information literacy become part of the entire educational process. Such an approach on the example of Finland, Germany, Canada, England, and Lithuania gives a positive effect, reflected in the assessments of the level of student’s knowledge.

The roundtable was organized in the framework on the project “MediaSabak: developing an insurance concept for the institutionalization of MIL and the development of MIL in Talas and Naryn oblast’ ”, implemented in close cooperation with the Ministry of Education and Science of the Kyrgyz Republic, the Kyrgyz Academy of Education with the support of “the Soros Foundation- Kyrgyzstan”.

Nowadays, media not only reflects the surrounding reality, its more than ever has a strong influence on persons political, public and private life. Innovative technologies have given such opportunities to citizens that it was difficult to imagine twenty years ago.  According to international Internet Organization in Kyrgyzstan, over 2 million active users of the global network and more than 7 million users of the mobile Internet at the rate of 6 million people! Thus, media literacy issues become important and relevant.

The Foundation “Center for Media Support” considers its priority for the coming years to promote media information literacy and support reforms in the digitalization of the educational process in Kyrgyz Republic. Only in recent years, within the framework of the “MediaSabak” project, the foundation trained 1,050 schoolchildren, 2,463 school teachers, 48 university professors in the country and 5 university lecturers from Tajikistan. And this work continues.

The Foundation emphasizes the need to introduce elements of media information literacy into the existing education system in order to form students with the necessary competencies for the safe use of communication tools, self-expression and the formation of their own point of view.

The Foundation “Center for Media Support” is non-commercial organization. Since December 2002, the Foundation has promoted the development of freedom of speech in the Kyrgyz Republic through the implementation of various media and information literacy development programs.

DataCon Central Asia 2019: the beginning of the regional dialogue in the field of data